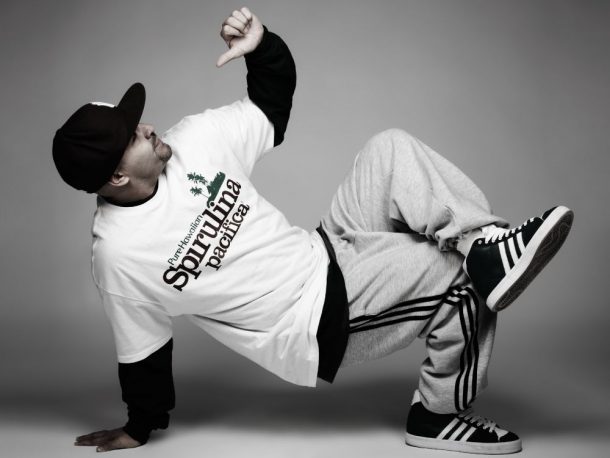 Ken Swift (born Kenneth James Gabbert) is a second generation B-boy, or breakdancer, and former Vice President of the Rock Steady Crew of which he was a longtime member and key figure. He is now President of the Breaklife and VII Gems Hip Hop movement in NYC. Ken Swift began B-Boying in 1978 at the age of twelve when he was inspired by dancers on the Upper West Side of Manhattan. Widely known in the B-Boy world as “the Epitome of a B-Boy,” he is universally considered by B-Boys to be the individual who has had the greatest influence on break dancing. Ken Swift is credited with the creation of many dance moves. His original footwork and “freeze style” became a foundational part of breaking, which was considered new concepts at the time.

Ken Swift has several film credits to his name, including Style Wars, the first Hip Hop documentary, and the first hip-hop major motion picture, Wild Style. His most famous movie was 1983’s hit Flashdance, where his two-minute dance with several members of the Rock Steady Crew launched the Hip-Hop scene into national attention. Ken Swift also danced in the motion picture Beat Street.

Ken Swift’s exposure to breaking first began in Manhattan where he encountered dancers participating in a then-popular street dance known as Uprocking. In 1978, an affiliate of Ken Swift’s, referred to as Dante, was the first person he claimed to have seen do the floor moves that made up breakdancing. Frosty Freeze, an original member of the Rock Steady Crew, had approached Swift and later cultivated him to become a fellow member of the crew. In 1981, Ken was exposed to block parties and street jams, which led him to his first indoor performance with the crew.

As a B-Boy, Ken Swift’s name originally was “Kid Zoom,” and had gone through consistent changes that include, “Ken Rok,” “Ken Ski,” ” and “Prince Ken Swift” before finally being settled as just “Ken Swift”. The Village Voice published the article “Breaking is Hard To Do,” which influenced a greater audience to garner an interest in Hip Hop and B-Boying. Along with several other members of Rock Steady Crew, Ken Swift performed regularly in local clubs at events such as Negril, Danceteria, the Kitchen and the Roxy, and he participated in the world’s very first International Hip Hop tour “New York City Rap”. In 1996, Ken started a dance company known as VII Gems. The goal of this company was to preserve New York city’s traditional dances, such as breaking and rocking. With Rock Steady Crew in 1997 Ken co-directed “Jam On The Groove”, Off-Broadway’s first Hip Hop musical.

As of today, Ken Swift is heralded as one of the greatest influences on Hip Hop culture, and a legend in the bboying community. He has participated in and judged dance competitions throughout the world in countries such as France, Switzerland, Sweden, China, South Africa, Finland, Italy, the Netherlands, Portugal, Spain, Brazil, Venezuela, Norway, Germany, Canada, Japan, Belgium, Russia, Portugal, Australia, New Zealand, the United Kingdom and the throughout the U.S. Because of his skill and reputation in the B-Boy scene, Ken became a member of the 1999 U.S. Team “1st Platoon,” which took first place out of six other countries in a dance competition known as “The Korea World Cup”. Although he is currently not an active member of Rock Steady Crew, he still considers himself to be a credible representation of the group. In 2004, Ken Swift is working on various projects with Inferno & Premo Entertainment, run by his affiliates Dante and Premo. Swift’s office resides above their club in Williamsburg known as Brooklyn Sole, and the downstairs club is used for training and teaching classes. At a local Manhattan elementary school, P.S. 84, with a grant from the New York Historical Society, Ken organized a course for 7-11 year olds entitled “The History of Hip Hop Culture in New York: Focusing on Dance” and in 2004, Ken founded “The Ken Swift School of Hip Hop Fundamentals” at Breaklife Studios in Brooklyn, New York, to allow for an environment for others to learn the art and history of Hip Hop.